The European spacecraft Venus Express has been successfully placed into a trajectory that will take it on its journey from Earth towards its destination of the planet Venus, which it will reach next April. A virtual twin sister of the Mars Express spacecraft which has been orbiting the Red Planet since December 2003, Venus Express is the second planet-bound probe to be launched by the European Space Agency.

Venus Express will eventually manoeuvre itself into orbit around Venus in order to perform a detailed study of the structure, chemistry and dynamics of the planet's atmosphere, which is characterised by extremely high temperatures, very high atmospheric pressure, a huge 'greenhouse effect' and as-yet inexplicable 'super-rotation' which means that it speeds around the planet in just four days.

The European spacecraft will also be the first orbiter to probe the planet's surface while exploiting the 'visibility windows' recently discovered in the infrared waveband. 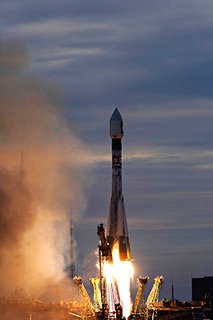