Showing posts from December, 2005
Show All

well it is that time of year, so sue me

I hate New Year resolutions, an inane concept if ever there was one.

Yet in the interests of blogging and having something to say, for I have been quiet, I shall make an exception to my usual rule.

If pressed I guess every year I do have the same thoughts, that the next one I shall endeavour to have more fun, a simple premise and a noble one at that I reckon. Can’t really fail that sort of resolution, well not without some serious misfortune, of which I’ve had my fair share – haven’t we all, yet one can always have some fun in any calendar year so prepare to tick the ‘passed resolution box’ in about 365 ¼ days.

So heres me Resolutions:

I shall endeavour to have more fun
I will try my hardest not to give up smoking – take that ya anti smoking wowsers
I shall attempt to remember one programme for more than 30 seconds after reading a TV listing – what is it with TV guides, are they some sort of amnesia device?
I will exercise more often and more regularly
I will stop running
I…
1 comment
Read more 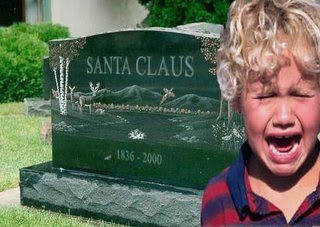 I guess this means I won't be getting a bike, again then.

Oh well at least I know why.

At the risk of being controversial


Have fun and be safe people :)
1 comment
Read more

Significant personal milestone: April 2005, 20 years since I did my first ever radio show - Radio Contact, 1440 IXC, Hamilton, First Song ever played - Killing Joke "Follow The Leader", I got told off for playing it, LOL

Massive Respect to: Thane Kirby and Jef Kay and all the GeorgeFM crew, you people rock! My good friends Mark Nola and Wayde Webster for another year of talking and making me listen to so much shite musi…
Post a Comment
Read more 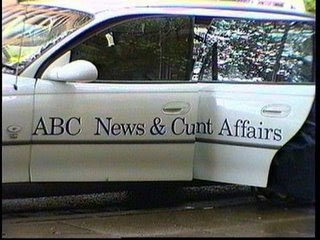 I wasted half an hour of my life watching President Bush's latest speech to the American people.

What a load of arse, is all I can say.

Thirty minutes of my life I shall never recover, I feel well ripped off.

How can the President of a 'freedom loving' democractic nation get away with his continual use of half truths, lies and total fabrications when addressing his constituants?

How can he and his administration continue to link Saddam Hussain with September 11?

How can the American public and the world sit back and not see these speeches as what they are - rather badly constructed propaganda. Josef Gobbels would be ashamed.

How, how, how..... hell it really is a insult to anyone thinking person on this planet and any other life forms that may be watching us from afar. This sort of shit demands ET stay home, don't visit cause we is morons. Brutal, violent, uncaring and hypocricitical morons.


One of the blessings of our free society is that we can debate these issues openly, e…
4 comments
Read more

December 14, 2005
Probably the worst comedian in the world for most fans of the medium

I think he's funny as and he's coming to Auckland, man I am excited

"Anyone here ever change dirty diapers? You get shit all over your fucking hands."

"Why are M&M's full of chocolate? Because it would be illegal to fill them full of shit."
Post a Comment
Read more

Gang culture wins on the day

December 14, 2005
Twenty-five years ago when I created the Crips youth gang with Raymond Lee Washington in South Central Los Angeles, I never imagined Crips membership would one day spread throughout California, would spread to much of the rest of the nation and to cities in South Africa, where Crips copycat gangs have formed. I also didn't expect the Crips to end up ruining the lives of so many young people, especially young black men who have hurt other young black men.

Raymond was murdered in 1979. But if he were here, I believe he would be as troubled as I am by the Crips legacy.

So today I apologize to you all -- the children of America and South Africa -- who just cope every day with dangerous street gangs. I no longer participate in the so-called gangster lifestyle, and I deeply regret that I ever did.

As a contribution to the struggle to end child-on-child brutality and black-on-black brutality, I have written the Tookie Speaks Out Against Gang Violence children's book series. My goal is t…
Post a Comment
Read more

December 07, 2005
Anyone else noticed how the mainstream media is starting to be quite critical of all that surrounds Iraq and US Foreign Policy?

Or is it just me and the hours I keep that have lead me to feel this way?

I do feel the winds of war are a changing, the tired and lumbering world of multinational corporate media are moving away from regurgitating official press releases and actually presenting perhaps the ‘truth’ for a change, or atleast increasingly a version of it that has thus far been all but buried. The stories themselves are very old for them who've been following this folly of a invasion/occupation/pacification but I do feel things are coming to light that need to from the quarters that have still the greatest access to the masses.

It’s with a sense of déjà vu I sit and watch stories unfolding that for myself and many millions of other war/US/Bush watchers have read and often debated about on the net for ages, years in some cases.

The Letter U and the Numeral 2

In August of 1991, SST Records released a single by the band Negativland simply called U2, featuring snippets of U2 recordings, outtakes from Casey Kasem's American Top 40, and a mangled version of U2's song "I Still Haven't Found What I'm Looking For."

Shortly after the release, Island Records filed a lawsuit against Negativland and SST over copyright infringement and deceptive packaging (the cover featured the letter 'U' and the numeral '2' in huge type). An out-of-court settlement was reached, but Island demanded repayment for its legal expenses and other incurred costs.

Apparently this cost the band over $90,000 US. A considerable sum of money for a independent recording act, one who in the interview mentioned below estimate they didn’t as a band earn that much in over twelve years.

In June of 1992 U2's publicist in L.A. contacted Mondo 2000 magazine on behalf of the group's guitarist, The Edge, with the idea of doing a rare interview…
4 comments
Read more

Is Democracy a dirty word?

December 02, 2005
One would hope not, yet recent history has shown how often this noble concept has been sullied by misrepresentation and in today’s world how those that use it or should I say use it in name only often have no concept as to its actual meaning.

The basis of this post was raised by this article; it has also been liberally borrowed from.

Lets start by backtracking some years to the inception of the United States, as they expanded into the interior the slave owners and land hungry business owners did so under the guise of democracy and freedom, I doubt the native American Indians or Mexicans would agree. During the First World War Woodrow Wilson proclaimed the US involvement in the First World War would “make the world safe for democracy." This is perhaps one of the more accurate uses of the term, though the end result was anything but.

Post Second World War as the Soviet’s gobbled up large chunks of Eastern Europe the new governments were called People’s Democracies, which of course no…
Post a Comment
Read more