Showing posts from January, 2006
Show All

Listening, listing, is this thing on?

January 29, 2006
Why is it all the best 'best of' music lists one comes across in the press are usually bollocks, self congratulatory smug baseless attempts at hipdom at the cost of someone elses craft and talent.

Then there's those that leave you feeling inspired and humble, when 'uber geeks' put the passion and personal into the list where the artists therein and the results of their craft are the stars and the only reflection one can gain from these lists is, damn I missed out on some cool shit and with a huge cheers for sharing to the compiler.

Reading a couple today make me want to have that major lotto win (well everyday I have this dream, shame I never buy tickets) and devote my last days on earth to simply consuming that music which I stumble upon and find, I thought of going soulseek (I also sometimes think of downloading this soulseek thing but have yet to bother, I just don't think its me) on both but from my perspective it just ain't the same as the hunt, coming u…
Post a Comment
Read more

January 27, 2006
In March 2006, Iran is slated to open the long awaited Iranian Oil Bourse (oil exchange program). Currently the petrodollar is dominated by US currency, but Iran and other OPEC countries want that to end. When the bourse opens, Iran will be trading on a euro-oil-trading system, the first step toward an alternative petrodollar. That could be bad news for the US. "In economic terms, this represents [a great threat] because it will allow anyone willing either to buy or to sell oil for Euro to transact on the exchange, thus circumventing the U.S. dollar altogether," writes Krassimir Petrov, an economics professor at the American University in Bulgaria in a January edition of the Energy Bulletin.

"Europeans will not have to buy and hold dollars in order to secure their payment for oil, but would instead pay with their own currencies. The adoption of the euro for oil transactions will provide the European currency with a reserve status that will benefit the European at the exp…
Post a Comment
Read more

Get over it already 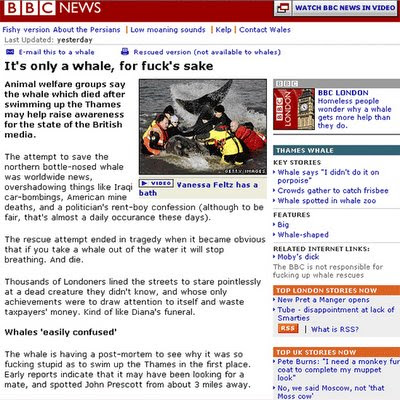 I got sent this picture via email today, normally after a giggle that would be it, but here I am watching the TV news and have just sat through a item on this story

Jeeze we're thousands of miles from the Thames, have our own whale stories yet this is our national news....

I just don't get it

now if it was a child attacked by a raging donkey....
1 comment
Read more

Thought For The Day

January 23, 2006
At present, there is only one country in the Middle East with "secret" and ambiguous stockpiles of nuclear weapons

To our Western world leaders they aren't the bad guys

Out of gas or slap me quick

I am, hence the sluggish blog action

Its that time of year when the sun shines and the brain seems to shut down, well it could be debated if mine was ever turned on, tuned out without a doubt.

I'm trying to ignore the Japanese whalers in our southern oceans

I'm trying hard not to read the prophet of doom that has proclaimed the end of our world by the end of the century (refer to 'Green guru says: We are past the point of no return.' Independent, January 16, 2006)

Opposition its not to be feared 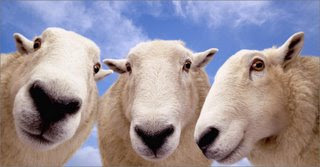 Geov Parrish: Is George Bush in political trouble? And if so, why?

Noam Chomsky: George Bush would be in severe political trouble if there were an opposition political party in the country. Just about every day, they're shooting themselves in the foot. The striking fact about contemporary American politics is that the Democrats are making almost no gain from this. The only gain that they're getting is that the Republicans are losing support. Now, again, an opposition party would be making hay, but the Democrats are so close in policy to the Republicans that they can't do anything about it. When they try to say something about Iraq, George Bush turns back to them, or Karl Rove turns back to them, and says, "How can you criticize it? You all voted for it." And, yeah, they're basically correct.


Geov Parrish: How could the Democrats distinguish themselves at this point, given that they've already played into that trap?

The Long and the Short Of It 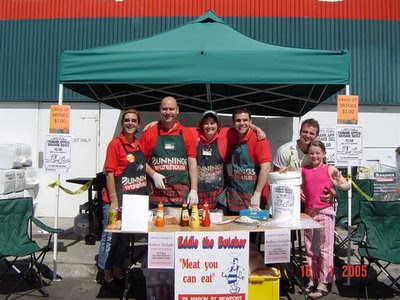 One day we went for camp to Buntings. We arrived late morning on Tuesday the 3rd. It was a weird place but it was these other kids. They looked so scared at eleven o'clock it was dark.

We made a fire and we had a good time telling stories and doing dances. Then suddenly everyone went dead quiet, we heard someone coming towards us.. coming closer and... closer. It was only the store helper. He told us to go to bed because it was nearly twelve o'clock. So we all went to bed. We didn't end up getting asleep until much later. We all had nightmares.

The next day we had a discussion and we decided to go home. The ghost of Jim Bob Walton he got in the bus without us knowing about it. He came to Mount Maunganui with us. When we got back and started to unpack the bus, we saw the ghost lying on the bottom of the bus. The leader yelled "RUN!" We all went back to the hall and got the pictures of Jim Bob Walton. We put them outside the hall but it chased after us.

January - the world is on hold

January 04, 2006
It’s a weird time of year in New Zealand in January, traditionally the country goes on holiday, once upon a time it seemed at least. These days however we've subscribed to the 24/7 culture that dictates stores are open, business's function and life in most corners of our little space down here goes on. Yet tradition seems to be maintained in some bastions of the workplace.

I personally am all for some traditions, the ones that celebrate our culture, our history and the positive aspects of ourselves are all good. Them that are just slack and stupid I'd like to see the back of. One of these is our media's way of only trying to serve up the bare bones of news around this period, I know in the rest of the world things are happening, life is indeed going on – how do I know this, I have the internet and it confirms as much.

In our newspapers, much space is currently devoted to the printing of large summer themed photos - kids in pools, beautiful sunsets, a child on a horse, so…
Post a Comment
Read more
More posts