Wiki vandalism is generally defined as editing a wiki in a way that is intentionally disruptive or destructive. There are four generally acknowledged types of vandalism: deletion of legitimate information, insertion of nonsense or irrelevant content, addition of unwanted commercial links (spam), and policy violations specific to that wiki.

I use Wikipedia a lot, its an amazing online resource and constant source of enlightenment and information. thus I am not a supporter nor subscriber to the concept of mucking with wiki pages for the sake of it - theres been some well documented infractions of the spirit of wikipedia by some notable types over the past few years - US politicians being one that springs to mind. This is inexcusable and could compromise this marvelous resource.

Then theres the simply stupid and juvinaile antics that again I don't condone nor encourage but... one such entry that is now deleted, for obvious reasons, I came across on a UK Music Forum posted by the authors. It had me in stitches and still does on re-reading, a example of drunken foolishness and English humour and again whilst I can't condone such actions, I'm not going to deny myself a bloody good laugh.

The entry, below, concerns a DJ called Seb Fontaine:

"Born to a semi-professional DJ mother, Fontaine grew up in West London and became aware of club culture at a young age. He began DJing professionally in the late '80s after dropping out of college and he never looked back.

His first notable residency was in 1989 at the Fridge in Brixton followed by another residency at the Wag; he spun mainly rare groove at both clubs though also dabbled with hip-hop and ragga. More residencies followed -- Subterania, Glitterati, and more -- though it was Fontaine's stay at Malibu Stacey alongside Craig Richards that established his reputation as an up-and-coming DJ. At Malibu, he began spinning deeper, darker, and harder tracks; the kind of tracks that would become his trademark.

In 1998, Fontaine got his big break, a bi-weekly residency at Cream. Soon after, his residency became a weekly affair, and within a year he was spinning in Ibiza, where Cream hosted parties at Amnesia. During this late-'90s run, Fontaine's career progressed quickly. He not only took on more impressive and more frequent gigs, but also began his series of Prototype albums for Global Underground and his show for Radio 1.

He quit his residency at Cream in late 2002 to focus more on touring but recently returned to London to being a new monthly called "Type". A mix for Thrive records presented by Perfecto was released in July of 2003. ~ Jason Birchmeier, All Music Guide

The biography above illustrates the well know story of international dj Seb Fontaine, what it fails to disclose however is the accusations of genocide and ethnic cleansing that have been brought against Seb Fontaine or "Mad Dog El Fonty" as he is known in the Balkans.

In April 1992 as the Bosnian conflict exploded into life, the presence of a chirpy West London lad who liked to eat the hearts of his enemies as he listened to FSOL began to run rampant in the streets of Sarajevo.

Fontaine's bloodlust was only stopped when his chief henchman Jeremy Healy severely miscalculated international opinion by partcipating in the srebrenica massacre, unwisely believing that the international community would allow a rwanda style genocide being committed against white europeans.

Upon the signing of the Dayton accord it is rumoured Mad Dog El Fonty returned to London on a full time basis. There are unsubstantiated reports he has used his substantial disposable income to fund the conflicts in Sierra Leone, Angola and the Congo." 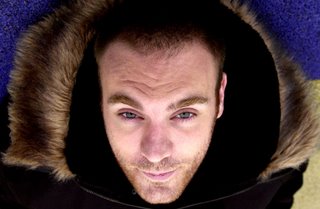