He has smuggled fake artwork into Tate Britain, and sprayed a vision of paradise on the Palestinian side of Israel's "security wall".

Now, the "guerrilla graffiti" artist Banksy has taken aim at the cult of empty celebrity and its current poster child, Paris Hilton.

The secretive artist has smuggled 500 doctored copies of Paris Hilton's debut album into music stores throughout the UK, where they have sold without the shops' knowledge.

In place of Ms Hilton's bubble-gum pop songs, the CDs feature Banksy's own rudimentary compositions. On the cover of the doctored CD, Ms Hilton's dress has been digitally repositioned to reveal her bare breasts; on an inside photo, her head has been replaced with that of her dog.

On the back cover, the original song titles have been replaced with a list of questions: "Why am I famous?", "What have I done?" and "What am I for?"

Inside the accompanying booklet, a picture of the heiress emerging from a luxury car has been retouched to include a group of homeless people.

In another shot, Ms Hilton's head has been superimposed on a shop window mannequin beneath a banner reading: "Thou Shalt Not Worship False Icons."

Instead of Ms Hilton's own compositions, the replacement CD features 40 minutes of a basic rhythm track over which Banksy has dubbed Ms Hilton's catchphrase "That's hot!" and other extracts from her reality TV programme The Simple Life.

The record credits have been re-edited to include thanks to the artist for his "wonderful work".

The bogus CD is not the first time he has branched out beyond the stencil graffiti that made his name. In 2003, Banksy glued one of his paintings on to a wall in Tate Britain, where it went unnoticed by staff for hours. The following year he smuggled a display case with a stuffed rat wearing sunglasses and a backpack into the Natural History Museum. At New York's Museum of Modern Art, he placed an Andy Warhol-style print depicting a tin of Tesco Value soup. Last year, he sprayed paintings on the Israeli security wall around the West Bank. " 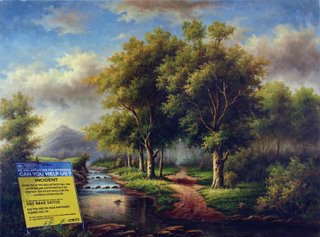