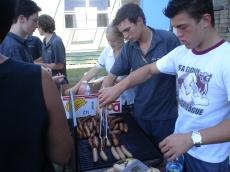 Election day 2005, feeling a little shady due to excess last night at the Social Club. Which I must say was jolly good fun. Good people, good tunes and a few drinks, nice.

The perfect start to my day to make a difference - crikey you wouldn't wanna be feeling too chipper prior to casting your vote now would you. This is after all very serious stuff.

Best state of mind is to be slightly grumpy (ready for queues), tired (yawning in line is a good look), shabby (yes these are the clothes I slept in), hungry (I thought vodka the night before constituted a healthy food regime), smelly (yeah so I smoke, tax me), excited (well why not), appear slightly confused by walking randomly into things (mental note to self, must clean specs), determined (having done my research and polled myself on many occasions I know whom I want to vote for) and most importantly have a few gold coins on hand for the sausage sizzle that one expects to find outside the polling booth that’s core task is raising money for some good works.

So on getting up, washing and staggering out of the house I walked to the polling booth. Having made my mind up whom I supported some months ago, it all seemed like a task that just needed completion so I could get on with my day of being on the couch tired and listless

I arrive at polling booth, no queues and the whole process must have taken all of 5 minutes to complete. I think I could have been faster if I hadn't stopped to look at the orange pen for some time before ticking the boxes.... mmmmm pens

Once I'd placed my completed ballot paper in the box provided I get collared by the lovely little old lady at the booth and forced to put on a "I've voted" sticker. Now like any good self respecting individual I promptly took this off (only class labels on me buddy... pulls up stubby shorts and adjusts Canterbury top), only to be forced by a tall older gent to put it back on before he'd let me out of the hall. Fine I figured, this will attract the ladies whilst I apply myself to a sausage or two at the charity stall.

But shock upon horror - no sausage sizzle at my polling booth! Nothing, not even a trace of any small unsupervised children running around. No groups of youths looking shifty, not a bloody thing.

Surely not I know you must all be thinking, but yes. I am afraid my entire reason for being today has been a complete let down.

No cheap and usually slightly burnt sausage wrapped in white bread accompanied by the obligatory Watties tomato sauce for me.

Now I tell you, this may seem a trivial point for some, but for me this sent a cold shiver down my spine.

Obviously things are going well in New Zealand. What better indicator is there than a precise lack of charity fundraising at a polling booth. We're doing too bloody well as a nation and there's nothing left to raise money for

Well I'm not having that, so I return to polling booth to request my vote back as I'd like to change my mind. Things aren't all good in the hood and I must make my feelings known.

I bet the voters in Afghanistan, Japan or any other nation for that matter that has recently gone to the polls didn't have to contend with such inhumane and callous treatment